To see this article in full from the source site: https://www.usnews.com/education/best-colleges/paying-for-college/articles/2017-09-20/see-20-years-of-tuition-growth-at-national-universities

COLLEGE GETS MORE expensive each year. In addition to high tuition prices, paying for housing, food, transportation, books and other school-related fees can add thousands of dollars to college expenses.

To cut costs and limit student debt, many families choose to send teens to in-state colleges. But data from the past 20 years shows that the average cost of tuition and fees for private and public National Universities has risen significantly since the late 1990s for both in-state and out-of-state students. National Universities are schools that are often research-oriented and offer bachelor's, master's and doctoral degrees.

The charts below show 20 years of tuition changes, as reported to U.S. News by the 381 ranked National Universities included in the recently released 2020 Best Colleges rankings. Tuition and fees are displayed by the rankings edition year; for example, the data for the 2020 edition was gathered by U.S. News in 2019. Here's a quick breakdown:

For the few schools that did not submit current year tuition figures, U.S. News used the prior year's number when calculating averages.

Dollar amounts in these charts have not been adjusted for inflation. However, tuition and fees at four-year National Universities are significantly outpacing inflation. The total consumer price index inflation increased by around 54% from August 1999 to August 2019, according to the U.S. Bureau of Labor Statistics.

The chart below shows the average tuition and fees for each year, starting with the 2000 edition of the Best Colleges rankings, which were released in 1999. 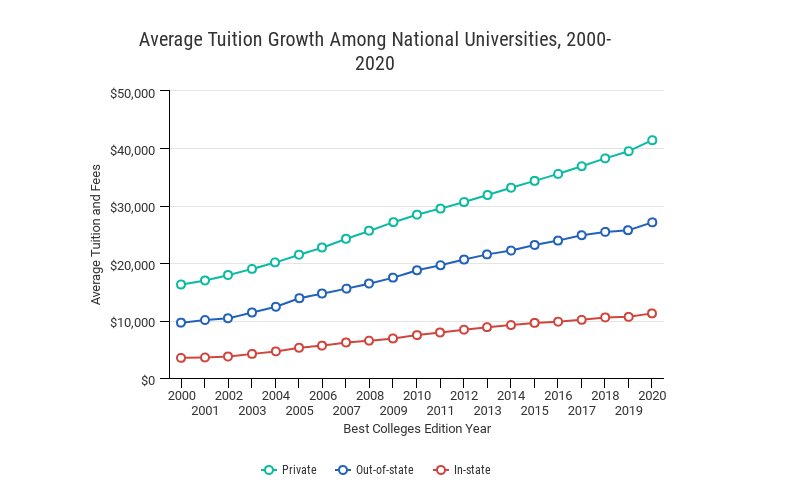